Secretive immigrant detention centers are popping up to deter people from exercising their legal rights. 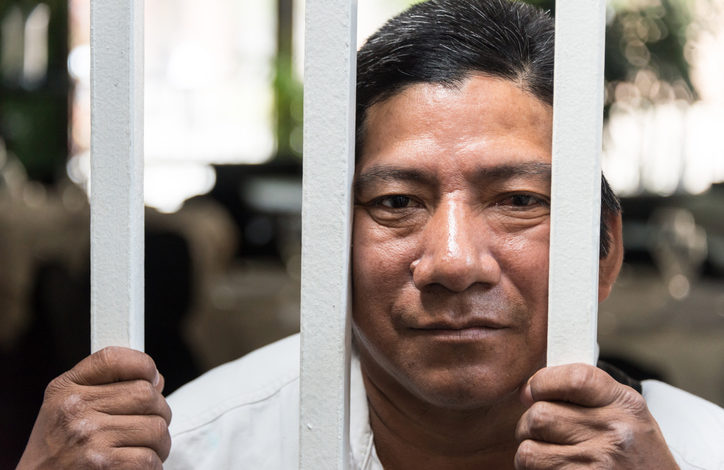 Currently, UUSC is working to shine a light on and dismantle the harmful family separation and detention policies in the United States that rip apart immigrant families. Across the nation, parents are separated from their children and entire families are locked away with few resources and no means of staying in touch with loved ones. Whether housed at family detention facilities, single-adult facilities, or facilities housing migrant children, one fact remains clear: these detention centers exist to discourage asylum-seekers from exercising their right to migrate. We examine one such facility in Louisiana that is part of a disturbing trend of “off-the-map” detention centers.

Last month, UUSC partner Activate Labs alerted UUSC to a humanitarian crisis occurring in an off-the-map immigrant detention center in Louisiana. What do we mean by “off-the-map”? Once asylum-seekers are moved to one of these prisons, they disappear from the online Immigration and Customs Enforcement system that families and lawyers use to find out where someone has been transferred; the locations are un-listed by ICE.

There is no ICE list or map that acknowledges the existence of all three of the LaSalle Corrections-owned facilities detaining asylum-seekers, let alone that provides information on their locations, the number of detainees held, or the names of those in custody there. The most comprehensive list is only publicly available because an advocacy group called the National Immigrant Justice Center obtained the data through FOIA (Freedom of Information Act) litigation. The upshot is that friends and relatives of those in ICE custody have no clear way of tracking where their loved ones are being held once they’re transferred to one of the new sites in Louisiana. If transparency and public accountability was an ICE priority, the agency could build a system that addresses those problems very quickly; the fact that ICE hasn’t done so speaks volumes.

Over the last six months, the majority of those being held at three private correctional centers owned by LaSalle Corrections have become ICE detainees, not conventional prisoners. Together, they hold more than 3,000 people, almost all asylum-seekers transferred from the border. They continue with the same guards—most of whom solely speak English and have no experience with the asylum process. This means no one is regularly available to answer basic questions before migrants must face an immigration judge, with all hearings over video-conference.

Activate Labs reached out when over 100 men went on hunger strike at the River Correctional Center to fight what has become a deportation machine. In the three months of the facility’s existence as an immigration detention center, no asylum-seekers were released on bond or parole, and they had not heard of a single successful asylum case. Using the one thing they could still control, they refused their food as long as a single judge held power over their cases: a Trump administration appointee and former ICE prosecutor. In retaliation, hunger strikers were sent to solitary confinement.

I was able to visit this rural private prison-turned-immigration detention center in mid-April. By the time we arrived at the River Correctional Center in Ferriday, Louisiana, I had driven for hours with two local volunteers who make this trip weekly, determined not to allow the remoteness of the facility to stop them. While we waited in a small side room, a guard explained to us that several buses of people incarcerated there for criminal convictions had just been moved out and that about 80 immigrants were bussed in to take their place—but we later learned the real number was more than 200.

We met with Adam, Anthony, and Matthew (names changed for safety reasons). It was distressing to see them shackled at the hands and feet throughout the visit. All three confirmed that in this off-the-map facility, more than 100 people had already been deported but no asylum-seekers had gotten out any other way since it opened. No parole, no bond, and no winning cases. People banded together across different countries of origin from Central America, Nepal, India, Cuba, and China for the hunger strike. They believed the hunger strike had been at least partially successful because two new judges were now being assigned to hear asylum cases.

But one of the leaders was still in solitary confinement and suffering greatly, kept in the cold and barefoot. Anthony and Adam told the volunteers that they were strip searched after their last visit the week before, but that the visits gave them courage and they did not want to stop because of that.

Matthew had all of his legal paperwork in a manila envelope and asked us to review a paper he was told to sign which was in English. He didn’t understand what it said and he had refused. We looked it over and explained it was a “parole determination,” a document from ICE saying they would not be letting him free to pursue his asylum case from outside detention. One section of the form had two check-boxes, one to accept the decision and another to challenge his ongoing detention in front of a judge. The top box accepting the decision was checked. This was the first time he learned what it actually said, and he was distressed that his opportunity to present a case for release in front of a judge had been systematically denied.

In spite of the circumstances, they were resilient and determined. “This struggle isn’t new to me,” said Matthew, “I know when to hold back, when to act. Justice will come.”

U.S. Attorney General William Barr has issued a new ruling to deny bond to many asylum-seekers and force most to complete their full asylum cases behind bars. The Defense Department is actively investigating which military bases can work for increasing “emergency” immigrant child detention. Two giant tent cities for housing arriving asylum-seekers, including families, are scheduled to open in Texas by May at a cost of more than $37 million. Asylum proceedings inside detention are often a sham, and denials aren’t based on the facts of a case or the real danger someone faces. With rapidly expanding and off-the-map detention centers, we will see increasingly dangerous conditions and abuses. We cannot allow this to continue with our tax dollars and in our name. Our only fix is to end immigration detention. Nothing else will ensure a fair process and respect the humanity of those that have fought so hard to seek safety here.

For more information on the rise of hunger strikes in immigration detention, check out this story from NPR.